The Politics of Personalism

As we engage with the world as scholars concerned with music and its political effects, it is important that we not only consider what we think and say, but just as importantly, who we engage and express ourselves with, and how we think and express ourselves with others. Doing so might enable us to establish new repertoires of social action in our personal and professional lives and new ways of creating knowledge in the world. As I have been processing my experiences doing fieldwork in a crowded, working-class neighborhood in Dakar, Senegal, over the past few years, and as I have begun to think about what I hope to achieve with my work, I have become increasingly drawn to an idea of “personalism” as it manifests in the postcolonial city.

The common academic use of “personalism” in West African politics often has a negative connotation. In Paulla Ebron’s (2002) Performing Africa, for example, a “personalistic economy” is an arrangement where praise singers (griots) affix themselves to wealthy patrons, creating a mutually-dependent situation where one must praise the other to earn their livelihood, and the other must pay to maintain their reputation. “Personal,” here, is a reliance on individuals rather than larger entities. For whatever positives personalism brings, it is also seen as the source of clientelism—it is individual patrons, and not broader communities or corporate and state bureaucracies, that are the sources of the praise singer’s income; important people build their profile through individual griots, more so than through objective measures of achievement or transparent reporting from neutral sources.

But the griots that I have worked with in Dakar are at the heart of a different kind of personalism. Like the griots in Ebron’s work, these musicians and verbal artists remain involved in building public personalities, but instead of focusing narrowly on wealthy political patrons, they enliven social situations large and small, saturating events with praises and other positive messages. As people spend time together in spaces animated by griot praise and drumming, they are brought into relation with ever-expanding interpersonal networks in the city, and they seem to secure new relations with others to a surprising depth. Women belonging to a mutual aid association founded on the basis of neighborly proximity, for example, stated in interviews with me that without the drummers that enliven their monthly meetings, they would never have known each other. At massive street parties called tanebeers, griot genealogists go beyond reciting family trees by highlighting important connections between the families of individuals at an event.

This manifestation of personalism aligns with notions of solidarity and interdependence through which many Dakarois navigate precarious living situations in the city; if the uneven development of resources, infrastructure, and governance makes securing a livelihood an unstable endeavor, the ability to draw on personal connections with dozens or hundreds of neighbors can provide a degree of relief. The act of dancing together at a monthly meeting or the knowledge of how your family connects to an individual being praised can be a powerful component in the creation and deepening of these connections.

If the practice of creating personal relationships was merely a survival strategy, however, it would have limited political valence. In Dakar, personalism as a way of life colors many aspects of daily experience in the city. Community arts associations like #MedinaImpoz and Yaatal Art (“Expand Art”) strive to fashion neighborhood streets as more dynamic artistic spaces, and at their meetings, members constantly praise one another for their presence (teewaay), acknowledging the effort and value of dedicating time to meeting face-to-face. Members of the neighborhood-level Muslim associations value the “work” (ligeey) that goes into producing weekly musical events that attract crowds of hundreds—drawing on notions of “service” (khidma) that are looked upon favorably by Allah. The power of personalism works in concert with the power of assembly as people strive to reshape their conditions of collective existence in the city. As Bruno Latour (2005) reminds us: “in this lowly world there lie in wait many more worlds that may aspire to become one—or not, depending on the assembly work we will be able to achieve” (118).

It is in this light that I want to consider what “personalism” might entail as a core feature of academic life. What would be possible if we were to fully value and expand the time that we spend together with our colleagues, creating widespread connections and cultivating relationships of significant personal depth? In “Pedagogies of Dissent” (originally a keynote speech to the American Studies Association), Kandice Chuh (2018) suggests that prioritizing collegiality enables forms of radical politics within the university setting. In particular, Chuh is concerned with collegiality as a model for academic freedom that breaks from the current model of professional elitism (the model where a narrow slice of the professoriat enjoys a freedom sanctioned by their position as experts and professionals, validated through tenure). A different kind of freedom is afforded to us when we rally around each other—when we learn about each other, learn from each other’s experiences, and invest in each other’s projects (ethnographic, political, musical, or otherwise). If certain kinds of political action make us vulnerable—for example, to charges of incivility, of not aligning with mainstream values, of raising topics that others deem “outside our specialty”—it is an orientation toward personalism, not professionalism, that will enable us to embrace the freedom to dissent. “Stretch time around associating,” Chuh writes, and we might achieve “the kind of collegiality that allows us to make and hold up our worlds. . . . a form of relationality only possible when uninvested in professional advancement or in the defense of institutions or principles but rather inclined always toward people and the planet in their inseparability” (168).

At its core, personalism—whether practiced by mutual aid associations in Senegal, or by graduate students in ethnomusicology—means engaging with others to such a great extent that we realign our practices and priorities, especially when doing so enables new ways of being and knowing. What we can hope to achieve as teachers, scholars, fieldworkers, musicians, and students is as much about the body of knowledge published in books and journals as it is about the kind of practice that we learn from being around each other.

Popular posts from this blog

- October 16, 2019
Dear Colleagues, This is the FINAL call for submissions for the Fall/Winter 2019 issue of SEM Student News. This new issue, vol. 15, no.2, will focus on the theme of Music & Affect with attention to intersections between affect, embodiment, political engagement, and/or mindfulness and meditation in musical or sonic practices. We are seeking article submissions on any topic but will give preference to those that fit within our theme’s area of discussion. Likewise, we will consider submissions from both students and working scholars alike. We particularly seek contributions to our "Dear SEM" column from professional academics and practitioners (see below for more details). We encourage authors to submit pieces in a variety of media. Submissions may be written, photographic, or multimedia (written with visual, audio, and/or video components). We particularly solicit audio/visual contributions to correspond with the theme for this issue. We are currently accepting
Read more 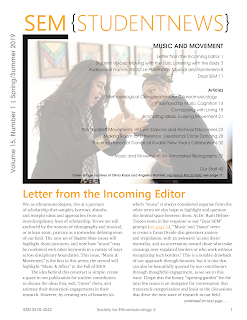 We are pleased to announce the publication of SEM Student News Volume 15, Number 1. This issue focuses on a theme of music and movement and features contributions by student and senior scholars on various related topics, including intersections with cognitive science, archival research on movement systems, renegotiations of the terms “music” and “movement,” and dance and embodiment studies as decolonizing practices. Additionally, semsn.com will soon host a supplemental resource list on music and movement , further complemented by an external curated music-dance bibliography in partnership with the SEM Dance, Movement, and Gesture Section. You can read the issue here and join the conversation on our Facebook page . Please feel free to forward this message and share the issue widely. Best regards, Eugenia Siegel Conte, Incoming Editor Davin Vidigal Rosenberg, Outgoing Editor
Read more